Roughly every two years, UNDP’s Nature for Development programme hosts the Equator Prize, an award recognizing outstanding local and indigenous community efforts to reduce poverty through the conservation and sustainable use of biodiversity. This year, the awardees are 22 groups that have developed innovative ways to improve livelihoods, secure access to food and water, and manage risk for disaster, all while protecting nature.

In preparation for the Equator Prize 2019 Award Ceremony, UNDP deployed a film-making team to all the winning communities in 16 countries to learn more about their work and document it with videos which would be featured during the ceremony in New York in September. 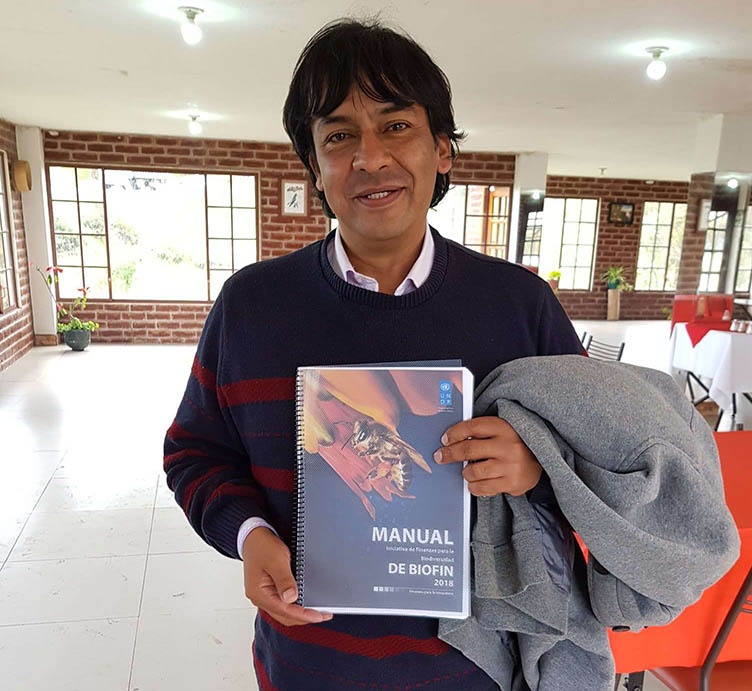 Getting ready to film the work of one of the winning organizations in Ecuador, Fondo de Páramos Tungurahua y Lucha contra la Pobreza, a UNDP representative Daniel Pérez saw the head of the organization Oscar Rojas carrying the BIOFIN Manual to one of the meetings. Given that the UNDP team had just concluded the Biodiversity Finance MOOC in collaboration with the Biodiversity Finance team, Daniel expressed his surprise at this coincidence. As it turned out, Oscar and his colleagues knew the course very well – they had completed it and were excited to talk about their motivation to learn more about biodiversity finance.

“It was absolutely worth walking several hours to the nearest village to print out the course materials”, said Oscar about his experience in the BIOFIN MOOC. The concepts discussed in the course had a hands-on value for Oscar’s team whose goal is to provide financial strategies for the conservation of the Páramo ecosystem.

A high mountain ecosystem situated between 3,200 and 4,200 metres above sea level, Páramo functions like a sponge, absorbing and storing large volumes of freshwater which are then gradually released, feeding river systems and preventing abrupt variations in their flow1. While Páramo’s importance has been recognized not only as the main source of water supply in the region with over 600,000 inhabitants and as a vital resource for sustaining the survival of numerous species found nowhere else on earth, the ecosystem remains threatened by climate change and excessive human intervention. The proximity of agricultural areas has put the residents of the Tungurahua province of Ecuador in fear of running out of clean water. This concern has served as a strong impetus for Fondo de Páramos Tungurahua y Lucha contra la Pobreza to find a solution for water conservation.

Since its establishment by the United Indigenous Movements of Tungurahua, local and provincial governments, private companies, and local communities in 2008, the organization has mobilized US$2,188,497 to conserve and restore over 4,000 hectares of “paramos” (high plateaus of Ecuador) and developed 27 management plans to improve water security in the Ambato and Pastaza River Basins. The fund’s alternative livelihood programmes have raised incomes in the area by 30 percent, while its environmental education programme has reached over 7,600 children.

The next step in the organization’s work is the development of a provincial plan for water resource management in the Páramo ecosystem. Seeking information on the steps involved in this process, the members of Fondo de Páramos Tungurahua y Lucha contra la Pobreza joined the BIOFIN MOOC community. The course proved to be instrumental to the organization by highlighting the ways to identify potential stakeholders and the need to analyze the socio-political context. The members of the initiative plan to use the skills they gained to redesign the organization’s current financing strategy with the goal of reducing costs and future expenses, as well as improving investment. Importantly, equipped with the tools from the course, the initiative plans to review the conservation needs of the entire Páramos region, make the necessary predictions, and optimize the use of resources.

For me, the course represents a customized training opportunity. The acquired knowledge can be put into practice immediately and can be shared and replicated in multiple scenarios. 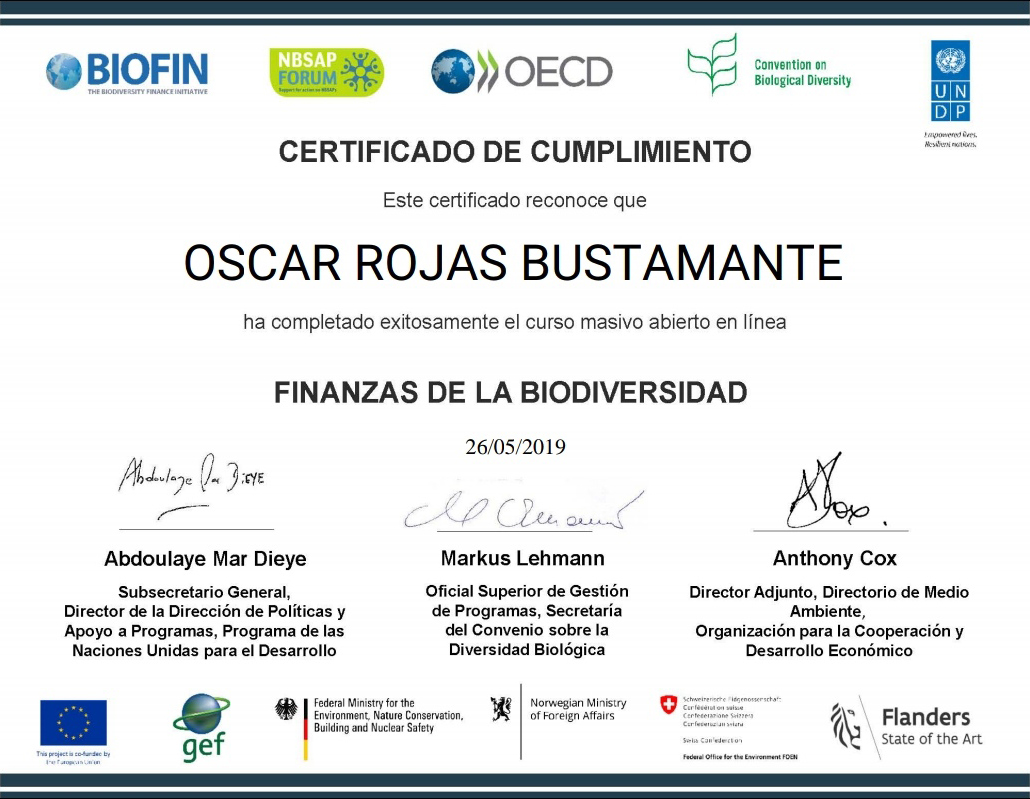 We congratulate Fondo de Páramos Tungurahua y Lucha contra la Pobreza on its important work, and hope that the self-paced course “Biodiversity Finance” will continue to serve as a resource for the organization throughout the development of their project.

If you are interested in becoming more skilled at developing financially sound and politically feasible solutions to conservation and development challenges, enroll in the self-paced course “Biodiversity Finance” which motivated the Páramos Tungurahua and Fight Against Poverty Fund to revise and expand its strategy. You will learn to assess the policy, institutional, and economic context for biodiversity finance, conduct a financial needs assessment to achieve a country’s biodiversity goals, and develop a biodiversity finance plan that identifies the most suitable finance solutions.

We look forward to learning with you!

This valuable project is very interesting and important for the protection of the paramos and, consequently, the water supply. I work with la La Asociación de Productores de Semillas y Alimentos Nutricionales Andinos Mushuk Yuyay, Cañar-Ecuador. We are a few hundred kilometros to the south, but we are also working with paramos conservation and restoration as part of our agroecological system. A dialogue between Fondo de Páramos Tungurahua y Lucha contra la Pobreza y Mushuk Yuyay would be productive to exchange ideas and experiences.

We strive to provide the best quality learning experience for all our course participants. To help us serve you better, we would appreciate if you could take 3 minutes to complete a short survey.